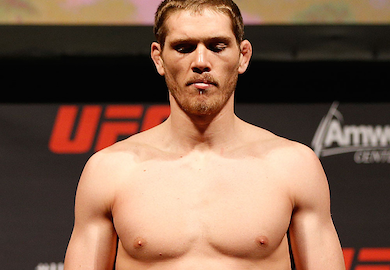 Jordan Mein and Hernani Perpetuo had the honors of kicking off the Fox Sports 1 portion of preliminary bouts.

Perpetuo struggled finding a comfortable striking range throughout the fight due to the size advantage of Mein. Though they are both welterweights at the same height, it seemed as if Mein’s reach was a lot longer than his opponents. This allowed him to slip in at odd angles that Perpetuo was not prepared for.

Perpetuo went back to his corner after the first round and stated that he was ‘feeling the distance’.

Mein seemed conformable right off the bat and it resembled his performances against Tyler Stinson and Evangelista Santos where he picked them apart with strikes.

Jordan Mein showed his versatility at the end of round two and throughout round three by taking Perpetuo down at will. Mein almost found himself in a submission situation, though, when Perpetuo rolled through and locked up a leg. Mein had nothing to work with and could have almost been submitted, but Perpetuo abandoned the submission and tried to finish the fight standing.

Perpetuo started to gain some momentum toward the end of the final round when he goaded Mein into a scrap. Mein got bested in a few exchanges and opted to take the fight back to the ground.

Perpetuo showed great heart in the final round, but his inability to close the distance in rounds one and two cost him the bout. Mein was deemed the victor after the judges’ decision.