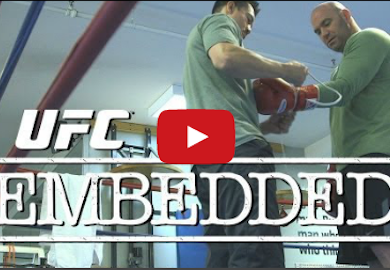 On episode #6 of the 7-part fight week series, UFC Embedded, it’s the day before UFC 173, and Dana White meets with a slew of Hall of Famers and current champions before the weigh-ins. Former heavyweight Daniel Cormier suffers through the final hours of his weight cut to 205, as his opponent, one-time middleweight Dan Henderson, coasts through the day with meals and massages. UFC Embedded is a new, behind-the-scenes video blog series focusing on the final seven days leading up to the epic UFC 173 Pay-Per-View event.