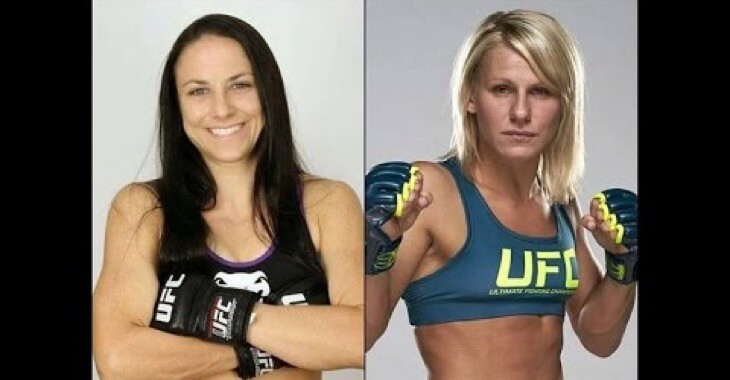 Justine Kish the ethnic Russian born fighting out of Cramerton NC (4-0 MMA) vs Nina Ansaroff (6-4 MMA). Kish is a European Muay Thai champion and formerly had a short stint on TUF but left the house do to a knee injury. Ansaroff was on a five fight win streak until her first UFC event against Juliana Lima saw her on the wrong end of a unanimous decision over a year ago.

Round one begins as Kish look to strike, but Ansaroff willing to engage with her in the pocket. Big flurries from both to start. They move back out to the center and reset. Ansaroff complains of an eye poke. . Doctor comes out, but we fight on. Quick exchanges again on the restart. Both women finding their targets. Kish with a spinning elbow. Big left lands, as well. Ansaroff with an elbow inside. Front kicks traded. Kish connecting again, looking good with her striking, Ansaroff not backing down though. Ansaroff working low kicks. Kish scores with a knee. Kish pressing forward. Ansaroff with some counters, but the Kish is hitting often and accurate. Kish pushes Ansaroff down but doesn’t follow. Kish pressures until the the round closes.

Second round begins and Kish looks to be in the driver seat, Ansaroff very quick with her counters, even if she’s not as powerful they are starting to add up. Ansaroff delivers a kick to the legs. Kish with a big right right . Kish output starting to slow down. But she’s still throwing heat he’s throwing heat. Kish works inside, and she nails a take-down with a head and arm throw. Ansaroff trying to scramble, but Kish settles on top. . She gets in a few right hands. Ansaroff works to get to her feet, but Kish controls from the front as round two comes to a close.

Final round as Ansaroff seems fresher between two, and she gets the early takedown. Kish settles into guard. Ansaroff on top, but Kish utilizing wrist control deffends. Kish turns for an arm, but Ansaroff pushes that effort aside and scores a right hand. Kish scrambles and gets to her feet. Ansaroff lands a right hand and wants to adjust her knee brace, but Kish threatens to strike. Kish gets inside and looks for a takedown. Ansaroff balances on one leg but eats a right hand. Ansaroff starting to fade, Kish attempts a takedown, lands it with under 1:30 remaing Half-guard for Ansaroff. Kish pushes to mount. Ansaroff turns and gives up her back.Kish goes to work and now she’s on top. Less than 30 seconds. Ansaroff nearly advances to mount to close the fight.