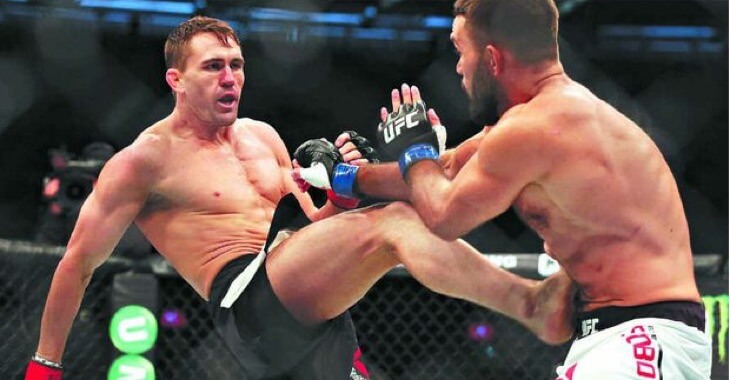 The Australian Kyle Noke (22-7-1 MMA) vs Alex “The Great White Morono is next to take the stage as the fighter prepare for the first round. “The Great White” is on a five fight win streak earning him a 100% finishing rate in those contests. Noke has dropped one in his last four but looking to put three together tonight.

Round one with Noke with a few early low kicks. Morono fires back with a few big spinning attack that missed the mark. Noke throwing serious heat on the feet. Morono with another spinning kick. Noke left lands Morono is hurt, but he steps back and recovers. Morono throwing big shots, but Noke looking poised with the more technical strikes. They move into the clinch. Morono working foot-stomps on the outside. Noke circles and escapes. Noke with a jab, and he slips the big counter. Noke lands again with a huge right hand. Morono throwing everything with high velocity. Morono lands with a big right that stuns Noke, but he takes it and continues on. Noke misses a spinning kick ending the opening round.

Round two and Noke pressing forward with sharp technique, as Morono looks to respond with more shots. Both men look content to stand and trade. Morono throwing big heat. Noke with a left and slips on a high kick. Noke bleeding from the nose geting worse. Morono on top. Noke moves up, and Morono takes his back, but Morono is too high. He falls off, and Noke gets on top. Morono turns to attack the right leg. Noke fights it off, and Morono has to settle for guard. Noke reigning blows from the top as time winds down.

Final round and Noke opens with kicks to the lead leg of Morono then to the body, as well. Morono slowing a little. Noke light on his feet, though he’s spitting up blood. Morono still looking to load up on one big shot, not setting up his power shots. Morono with a Superman, but Noke blocks and throws a clean straight. Noke shoots for a take-down, but Morono pushes him aside. It’s Noke that lands with the spinning elbow. Morono throws a big right. He’s looking for the one big shot. One minute left. Noke gets the takedown, but Morono starts rattling off elbows from his back. Morono turns and looks for the armbar. He isolates the left arm. Noke turns and gets through it. Noke finishes the fight on top.