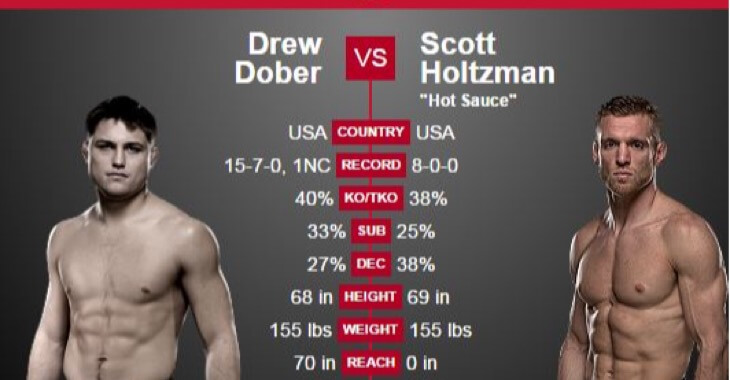 Scott “Hot Sauce” Holtzman (8-0 MMA) against Drew Dober (15-7-1 MMA) should be a a classic match up of striker vs grappler. Dober who has a background in Muay Thai and BJJ will have better success on the ground where “Hot Sauce” is going to want to keep this fight on the feet.

They clinch up and Holtzman gets the takedown. Dober in full guard. He creates space and tries to somersault out but can’t. Dober goes onto his right hip but can’t push away, then gets in switch position as Holtzman counter wrestles. Dober back to his feet now but stuck on the cage. Holtzman lands another horizontal elbow on the clinch break. Dober glances with a step-in elbow. They clinch up and Holtzman again ends up on top after Dober loses his balance on a throw attempt. Two heavy shots from Holtzman on top. 10-9 Holtzman.

Final round as they collide in the center as they both exchange. Dober slips in a left hand and completes a takedown. Holtzman is back up quickly, circling off the cage and glancing with a nasty spinning back-elbow. Dober dives on a double leg and works hard to finish it. Dober on top in Holtzman’s half guard. Holtzman tries to isolate Dober’s left arm to no avail.

Holtzman gets full guard but eats a pair of sharp elbows in the process. Dober with a step-over pass into half guard. Holtzman takes a knee and stands back up, then manages to separate. Referee Herb Dean stops the action to have the doc check on Holtzman, whose face is a crimson mask. He gets the nod and we continue. Holtzman glances with a high kick. Dober with a sharp angle-left. Dober gets in on a double leg but takes a pair of spiked elbows to the temple. Holtzman tries to hit a switch but Dober slips into the rear waist cinch and takes him down.