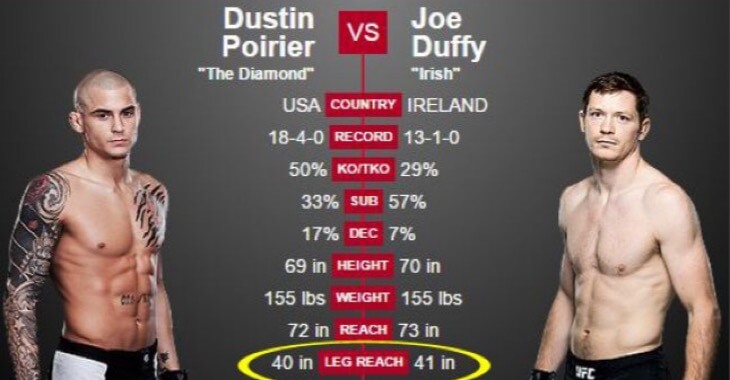 The long and awaited bout between Dustin “The Diamond” Poirier vs “Irish Joe Duffy is moments away from the action as the two missed a chance to square off back in October but Duffy (14-1 MMA) was concussed during training. Poirier (18-4 MMA) is looking to increase his win streak to three.

Round one Duffy presses Poirier early but counter right. Duffy with the hands down low shoots a few jabs in Poirier’s face. Poirier answers with two short rights, then glances a few blows and trade shots in the pocket. Poirier catches him with a jab but Duffy answers with a hard right counter, then flurries when Poirier covers up and leans on the cage hurting The Diamond.
Poirier recovers and steps in with a few jabs but then walks into a short right from Duffy. Poirier tags him with a right and then lands two more shots in the clinch to set up a take-down. Duffy sits up on the cage and Poirier squeezes his knees together to stop an escape. Poirier hammers Duffy with a big elbow. Poirier looks for the front headlock as Duffy stands up but can’t keep control. They both land shots to the head on the clinch break. Poirier keeps leather in his face and Duffy lands a right to close the frame. Got a napkin? It’s a bloody good mess.

Round two begins as Poirier steps in for a takedown and ends up putting Duffy against the fence in the clinch. Poirier gets him off balance and lands a takedown. Duffy takes a knee and Poirier wraps a leg, threatening to take his back. Poirier leaking out the nose is digging in.
Duffy gets into full guard but takes two shots to his head. Two elbows from Poirier on top. Another pair of elbows from Poirier. Now he switches to left elbows and cracks Duffy with muliple elbow strikes. More elbows reigning down on Duffy’s head to close the round.

Inside low kick lands for The Diamond. Duffy senses the urgency throwing left hooks and high kicks with bad intentions. Duffy lands a push kick to the gut. Poirier throws a straight left and transitions into double leg. Both men scramble for position as Poirier attempts to lock something up.
Duffy rolls into a heel hook that Poirier is slow to defend. Poirier back in Duffy’s closed guard and they’re finally in the center of the cage. Duffy with strong wrist control on Poirier’s right arm but the ref steps in and separates them with a minute left. Snapping jab for Poirier. Heavy left hook to the mid-section from Duffy; Poirier lets him know he’s ok with a thumbs up, a left straight and another double-leg from DP. Elbow from Poirier on top. Duffy locks in a deep triangle but time runs out.