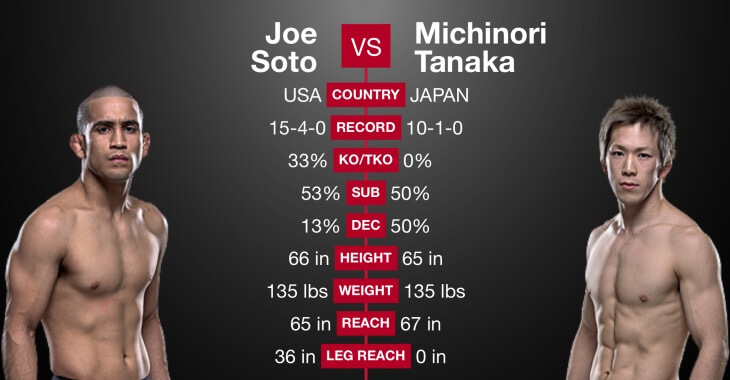 Second fight of the night is Joe “One Bad Mofo” Soto vs Japan’s Michinori Tanaka. Soto is on a two fight losing streak and looks to turn things around in 2016. Tanaka was undefeated winning his UFC debut but losing his most recent outing last year against Kyung Ho Kang at UFC Fight Night 52.

Round one opens up and Tanaka comes out in a wide stance relying on his powerful movement to move in and out while Soto lands a nice leg kick but he fails to take down Tanaka showing off some good TDD. Tanaka lands a straight right with three minutes into round one. Tanaka’s unorthodox movement looks to give Tanaka an advantage as he takes down Soto, Soto then transitions to a triangle choke under a minute and losses position as both fighters stand and share smiles as the round closes.

Round two begins with Tanaka blasting with counter left hooks as he anticipates Soto’s attack, then he has a high kick blocked. They trade low kicks. Tanaka frustrating Soto’s timing with a right/left hook combo, then lands a knee to the body and another right/left medley. Soto rips into Tanaka with another hard outside low kick. Tanaka keeping his hands low might be showing signs of fatigue or he’s setting up for a counter.

Soto shoots a takedown and Tanaka hits a nice counter whizzer. Soto locks in a guillotine and closes his guard. Tanaka pulls his head out and lands a right forearm. Two elbows for Tanaka. Soto lifts his hips and attempts a leg lock but Tanaka gets out of danger Tanaka lays on the GNP and it’s answered Soto answers with hammer fists and elbows from the bottom.

Final round and Soto looks more lively flashing his jab, outside low-kicks from Soto but Tanaka fires back with multiple jabs that connect, the fighters flash each other smiles as Tanaka shoots for a double and take Soto down again, from the bottom Soto locks up a guillotine deep with under 2 minutes and lets it go. Tanaka postures up lands a few blows as Soto scrambles to his feet. Both men throwing power shots with a minute left as Tanaka looks like start fading fast as the round comes to a close. Soto lands a take-down to end the contest.