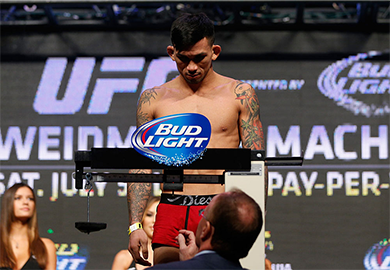 Marcus Brimage made his bantamweight debut tonight and looked fantastic. His decreased muscle mass improved his gas tank and he looked fresh, fast, and responsive throughout the entire fight. This is the best he has ever looked. The judges, however, did not look that great when their announcement was read.

When standing, Brimage dominated Doane and hacked away at his leg with kicks. In the middle of the second round, Doane was dropped with a leg kick and he was forced to switch his stance.

Doane tried to shift momentum by landing takedowns, but he could not do anything with them. Whenever Doane was close to locking up a submission, Brimage defended well and moved out of harm’s way by getting back to his feet.

Brimage continued to target the leg in the third round and dropped Doane multiple times. Doane showed great determination and perseverance by continuing to press forward and even almost locked up a submission on Brimage, but Brimage was once again quick to escape.

When Russell Doane was announced the victor, the crowd grew silent and Twitter blew up about how the judges scored the fight wrong. Do you think the judges made the right decision?