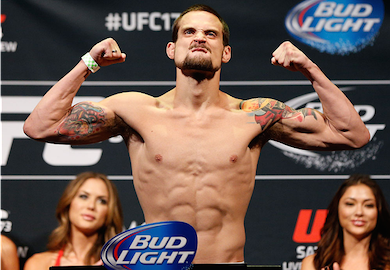 Jamie Varner and James Krause kicked off the main card of “UFC 173: Barao vs. Dillashaw” and it was cut short due to an unfortunate injury.

In the first minute of the bout, Varner landed awkwardly on his left ankle and apparently broke it. He continued to push through the pain for the remaining four minutes and did not even consider quitting during the first round. Whenever he lunged forward with a punch, he would collapse to the ground because his foot did not get back in place to reset his stance. Krause landed some big shots and it was clear it was only a matter of time before the fight was over.

As soon as the first round was over, Jamie Varner called the referee over and told him he could not continue the fight due to a broken ankle.