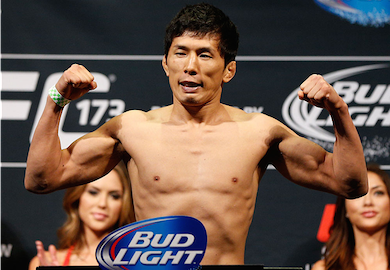 Takeya Mizugaki and Francisco Rivera set the pace for an exciting fight after a scrappy first round. Mizugaki dropped Rivera with a huge shot in the middle of the first round but did not go in for the kill. This allowed Rivera to recover and gain some momentum of his own by landing some takedowns and easily transitioning.

Francisco Rivera tagged Takeya Mizugaki in the second round, which forced Mizugaki to look for a takedown. It was an odd takedown attempt which caused him to land on his back. Rivera looked for a guillotine but he did not lock in his guard and that allowed Mizugaki to escape. From that point on, Mizugaki controlled the round on the ground until the sound of the horn.

Rivera needed to end the fight in the third after an unimpressive first and second rounds, but he did not fight with any ferocity at all. Mizugaki took him down and added more top-control time to his total and Rivera did not attempt one buck. He got back to his feet with thirty seconds left, but it was too little, too late then.