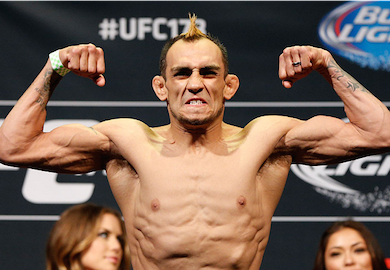 Katsunori Kikuno’s hands hung low the entire fight and it was only a matter of time before Tony Ferguson sent him crashing to the ground.

Katsunori Kikuno’s style of fighting, while unorthodox, usually paid off for him. It tends to confuse fighters so much that he can attack from different angles and sneak devastating punches through holes. Tony Ferguson did his homework, however and attacked first which forced Kikuno to backpedal the entire fight.

Tony Ferguson landed a right cross with just under a minute remaining and it knocked Katsunori Kikuno out cold. Kikuno’s head bounced off the canvas and the referee stepped in right away to wave it off.\

Ferguson improved his record to 16-3.

Tony Ferguson def. Katsunori Kikuno by way of KO (Punch) 4:06 of Round 1