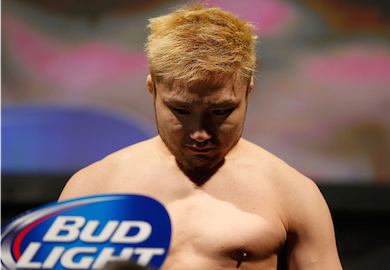 In one corner stood Takanori Gomi, the ‘Fireball Kid’ who puts 100% into every single one of his punches. In the other corner, we saw Isaac Vallie-Flagg, an individual who has not suffered a single knockout loss in eleven years. As expected, this fight was scrappy and it went the full fifteen minutes.

Gomi’s age is starting to take a toll on his gas tank and it’s questionable if he can call himself the ‘Fireball KID’ anymore. Putting everything you have into all your punches can drain anybody’s gas tank quickly, let alone a 35 year old.

As a matter of fact, both men showed signs of fatigue in the opening minutes of the fight. Vallie-Flagg tired out slower than his opponent, but his hands were hanging low at the start of the second round and they were on an even playing field throughout the remainder of the fight.

Gomi still possessed a great amount of power in his shots and Vallie-Flagg’s face showed evidence of that when his right eye started to swell up halfway through the second round. With the statistical side of strikes being so even the entire fight, the visual damage may have given Gomi an edge when the judges’ decision was read.