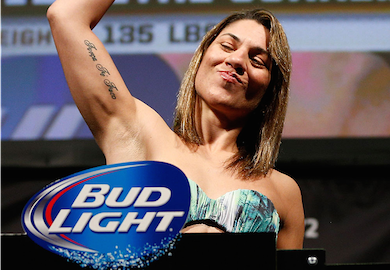 Possessing a seven inch reach means nothing if you do not know how to utilize it. Bethe Correia somehow established herself as the aggressor early on by outstriking her lanky opponent. Jessamyn Duke struggled to find a safe distance to strike from that didn’t lead to her getting popped with a jab.

For every strike that Duke landed, Correia would land two or three of her own. At one point in the fight, Correia had outstruck Duke 105 to 55. The only time that Duke showcased her potential was when she would land knees in the clinch or when she landed a takedown.

When Duke would secure a takedown, Correia would either scramble and end up on top or stand right back up to her feet.

Bethe Correia was simply more busy than Jessamyn Duke. Duke has the potential to be a great mixed martial artist, but like Stefan Struve, she needs to figure out how to use her height and reach to her advantage.