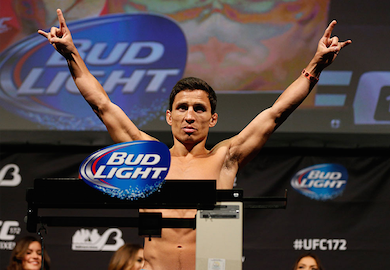 Tim Elliott applied a great deal of pressure early on when he put Benavidez on his back three times in the first round. Benavidez found himself trapped in a crucifix but he stayed active enough to escape and ultimatly end up on top of Elliott looking for a guillotine.

Benavidez trapped the right arm of Elliot during his set-up of the guillotine and transitioned to full mount. Benavidez started to crank and Elliott had no arms to tap with, so he was forced to tap with his feet! Mario Yamasaki peeled Joseph Benavidez off his opponent and that was that. It’s another Guillotine Win for Team Alpha Male.

During his post fight interview, Benavidez called the choke the “Joe-Uh Constrictor”. His strategy is to trap both of his opponents arms during the choke, forcing a full-body tap.

Joseph Benavidez def. Tim Elliott by way of Submission (Guillotine) 4:08 of Round 1