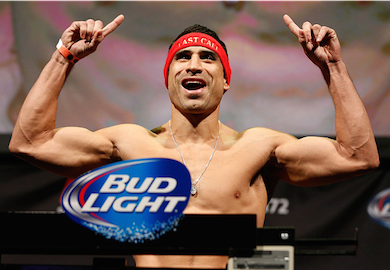 The first fight of the FOX Sports 1 preliminary portion of the card may have sold the pay-per-view for some as it featured one of the most devastating knockout-shots on TV.

Both Charlie Brenneman and Danny Castillo were looking to rebound from losses in their last octagon outings. Brenneman took the fight to the ground twice in the first round and was able to get in position for a couple submission attempts. Castillo defended the attempts well and eventually made it back to his feet to escape the first round.

Early on in the second, Brenneman and Castillo were both looking to land right hooks at the same time. However, Castillo’s ability to change levels and his possession of speed caused him to land the shot first. The result was one of the most devastating one-punch knockouts we have seen in a long time.

The slow motion replay showed Brenneman’s skin struggling to catch up to his skull after Castillo blasted it with his right hand. Charlie Brenneman fell to the mat and the referee waved the fight off.

Danny Castillo def. Charlie Brenneman by way of KO (Punch) :21 of Round 2