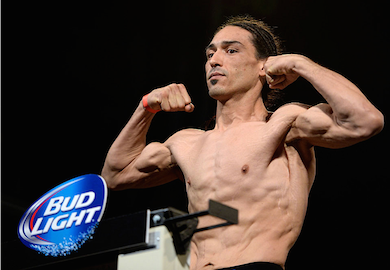 Renee Forte missed weight for this bout but still appeared dominant in the opening round. Forte landed a takedown and almost immediately took the back of Francisco Trevino. Forte was close to locking in the rear naked choke, but he could not slide his forearm under the chin on Trevino. The constant jockeying for position likely tired Forte out early on, as he was extremely tired at the start of the second.

Round two showed much more action from Trevino as he picked apart his tired opponent. He took him down a couple times and even though the takedowns led to nothing, it certainly helped as this fight went to decision.

Francisco Trevino improved his record to 12-0 with tonight’s victory.