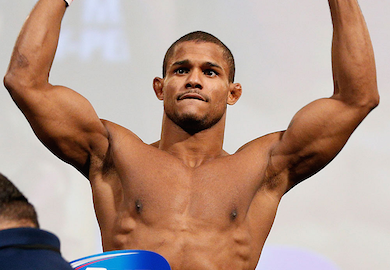 Fox Sports 2 played home to the preliminary portion of UFC 171. Sean Spencer and Alex Garcia did the honors of kicking off the action at 8:00 PM ET and it was a fun start.

Alex Garcia was looking to land a big shot in the first round, but he kept whiffing. Garcia was lucky that Spencer hadn’t found a comfortable striking distance yet or he could have been countered a number of times. The two eventually found their distance and began to loosen up in the second round.

Garcia landed a takedown but it led to nothing and as soon as Spencer got back to his feet, he landed a big right hook. Garcia was wobbled and Spencer was working to finish the fight, but he was not protecting his head. Garcia countered a straight kick with a right straight and dropped Spencer. With both men groggy, it was fun to see them try to end the fight. Garcia landed another big right hand but Spencer refused to back down and continued to press forward. Both men walked back to their stools and would see a third round.

Once again, both men landed big shots in the third round but none of them were fight-threatening like in the second round. Garcia landed multiple takedowns throughout this round, tallying up a total of eight takedowns in the fight. Spencer showed a great warrior spirit, but it was not enough to pick up a decision win.