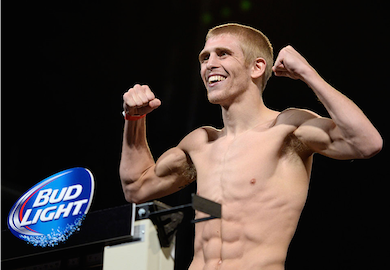 Justin Scoggins seemed to be one step ahead of Will Campuzano during the entire fight. Scoggins found a comfortable striking distance before Campuzano, landed the first takedown and would always come out on top of striking exchanges.

Scoggins landed a takedown in the second round but Campuzano showed great awareness by trapping his opponent’s head and going for a guillotine choke. Scoggins stayed calm and escaped after fifteen seconds of struggling, and he continued to dominate the rest of the round. He gave Campuzano no room to breathe and forced him to carry his body weight while on the ground.

Scoggins also displayed an impressive standup game. His style is heavily influenced by karate and he landed beautiful kicks throughout the fight.

Campuzano felt like he needed to end the fight in the third round in order to win and started things off fired up. He ran to the center of the octagon and threw some wild punches and kicks, but it wasn’t long before Scoggins landed his fifth takedown of the fight and started to implement some ground-and-pound.

Justin Scoggins dominated all three rounds and was awarded the unanimous decision victory by the judges. Scoggins improves his record to 9-0.