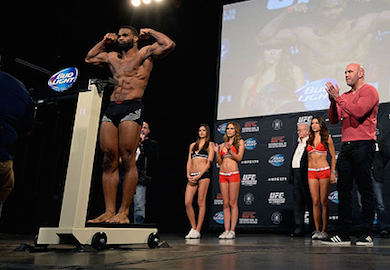 Carlos Condit and Tyron Woodley brought the crowd to life after an exciting first round. Woodley utilized his ability to close the distance and land quick, hard hook multiple times in the opening minutes of the fight. Condit started to turn the pace up at the end of the first round and it showed he found his distance in the second round.

Condit was able to keep up a fast pace while Woodley was starting to slow down in the second round. Unfortunatly for Condit, a painful leg injury put an end to the fight.

Condit got taken down and winced in pain, but it was not clear as to what the injury was. When they got stood up due to a lack of action, Woodley attacked the front leg right away and Condit put all the pressure on his back leg and it gave out. In the replay, it looked like Condit’s leg gave out and popped out of place.

After the fight, Woodley called out the victor of tonight’s main event.

Tyron Woodley def. Carlos Condit by way of TKO (Injury) 2:00 of Round 2