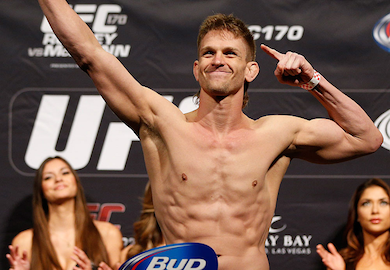 Mike Pyle and TJ Waldburger put on a competitive, even bout as they were both trying to bounce back from losses in their last outing in the octagon. Well, it was even until the third round.

Despite landing decent shots on each other throughout the fight, their striking game was relatively even. TJ Waldburger landed good shots in the first and some impressive combinations in the second while Mike Pyle utilized his distance to land power shots and takedowns to get the judges on his side. After two rounds of close action, it seemed to all come down to the third and final round.

Mike Pyle caught and dropped TJ Waldburger with a spinning back elbow early on in the third round and it all went downhill from there for Waldburger. Pyle followed up with a knee to the head and some elbows, but it seemed like Pyle recovered. Pyle landed another shot which forced Waldburger to shoot for a takedown where he ate a knee to the skull. Pyle took advantage of his positioning and went for a guillotine but could not lock it up.

Pyle proceeded to do some serious damage with elbows and punches from the top. Herb Dean gave Waldburger plenty of time to recover, but he just ate shot after shot. It was brutal.