UFC 166 RESULTS: Dodson Knocks Montague Out In The First 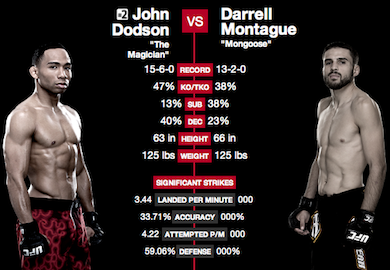 John Dodson made quick work of Darrell Montague and finished him in the very first round. Montague tried to keep Dodson at bay, keeping his distance by throwing leg kicks but Dodson was persistent and continued to press forward.

Montague got dropped in the middle of the round and was in serious danger. Montague quickly recovered to the surprise of the fans and the fight went on.

Dodson’s flurry of shots did not stop, however. Montague ate a left straight that sent him flopping to the mat. He was out before he hit the mat and the referee was quick to stop the fight.

John Dodson defeated Darrell Montague by way of Knockout (Punches) 4:13 of Round 1