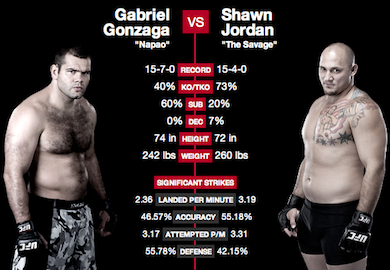 Not much to write about here.

Gabriel Gonzaga was the aggressor right from the start and was throwing bombs from the get-go. It was back and forth for a bit with each fighter connecting with their own powerful shots, but Gonzaga landed a monstrous right hook that sent Jordan to the ground. Gonzaga smelled blood and went in for the kill as he dove on him and connected with multiple bombs. It was only the matter of time before the referee pulled him off and ended the fight.

Gabriel Gonzaga defeated Shawn Jordan by way of Knockout (Punches) 1:33 of Round 1