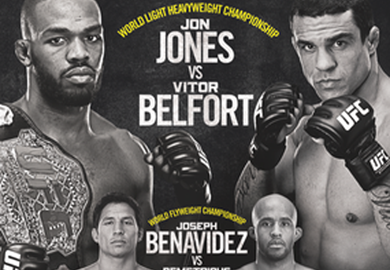 In the main event Jon Jones will attempt to defend his title against the always tough, MMA legend, Vitor Belfort. In the co-main event the first ever UFC flyweight champion will be crowned when Joseph Benavidez faces Demetrius Johnson.

Five live bouts are slated for the evenings main card which will air on pay-per-view, four preliminary card fights are scheduled to air on FX and three will stream live on facebook.

Tune in here for your results and to discuss the action with the BJPENN.COM Nation as the night gets underway.