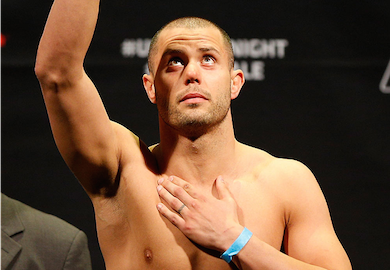 In a journey that started in January 2014, Chad Laprise has finally won The Ultimate Fighter Nations: Canada vs. Australia welterweight tournament. Patrick Cote called it from the start of the season.

Olivier Aubin-Mercier really struggled and did not find a good range to strike from. It was evident that Chad Laprise practiced his grappling defense as he put a stop to nearly every takedown Aubin-Mercier attempted. Whenever Aubin-Mercier did land a takedown, Laprise was quick to get back to his feet.

Aubin-Mercier started off the fight by controlling the center of the octagon but he did nothing with it. He constantly allowed Laprise to strike first and for every punch that Aubin-Mercier hit, Laprise would land two and a body shot of his own.

Aubin-Mercier finally landed a takedown at the beginning of the second round. Laprise scrambled and almost walked into a guillotine but he escaped and made it back to his feet; he wanted nothing to do with Aubin-Mercier on the ground.

Aubin-Mercier tired out early on and by the time the fight was over he fell to his back. Chad Laprise cut off all angles of the cage Aubin-Mercier was trying to work with and his neutralization of offense won him the fight. Sometimes, a good offense is a great defense.