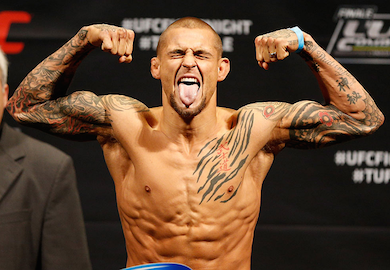 Akira Corassani and Dustin Poirier kicked off the main card of ‘The Ultimate Fighter Nations Finale’ with their exciting featherweight bout. Their weigh-in scuffle brought a lot of attention to their fight and everyone in attendance was hyped for this one to start.

Poirier was the aggressor in this bout, attacking early and often. Corassani was patient and allowed a couple of Poirier’s strikes to sneak through so he could land a hard counter shot of his own. Corassani landed a huge punch that knocked his opponent down, but he allowed Poirier to get back to his feet and recover.

As the fight progressed, it was evident that Corassani’s offense was fading and Poirier’s punches became more precise. Corassani ate a brutal right uppercut in the beginning of the second round and let his guard down. Poirier smelled blood and let out a barrage of punches that caused Corassani to fall to the ground. He turtled up as ‘Diamond’ continued his assault and the referee called a stop to the fight. Akira Corassani suffered a broken nose for the second fight in a row.

Dustin Poirier def. Akira Corassani by way of KO (Punches) :42 of Round 2