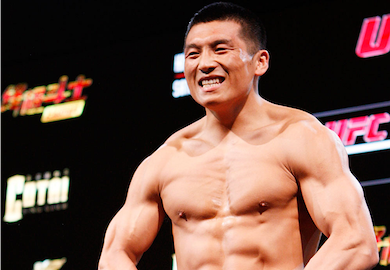 Zhang Lipeng and Wang Sai battled today to decide who would be the first winner of ‘The Ultimate Fighter: China’. Zhang Lipeng did just enough work to earn the split decision victory and in turn, was rewarded with a six figure contract with the UFC.

Lipeng almost ended the fight in the first round while he had the back of Sai. The body triangle was locked on and Lipeng’s forearm was under the neck of his opponent and he was cranking. Sai showed fighting spirit and was able to peel Lipeng’s arm off his throat. From that point on they seemed to fatigue quickly which lead to both men sweating profusely.

The sweat allowed Sai and Lipeng to easily slide out of submission attempts which lead to a stalemate on the ground. While standing, though, Sai would land the more significant shots and Lipeng would land the slam takedowns. By the time the full fifteen minutes expired, everyone in the arena thought Sai had done enough to earn the decision victory. The judges had other ideas, though, as two of them awarded the fight to Lipeng.

Do you think the right fighter won ‘The Ultimate Fighter: China’? Share your thoughts in the comment section below!