TUF China Finale Results: Kim Destroys Hathaway with a Spinning Elbow in Round 3, Gets KO Win 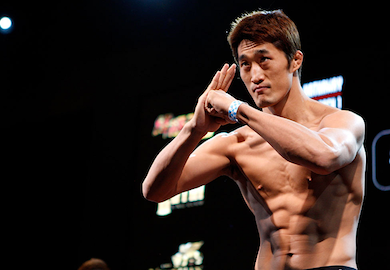 Both Dong Hyun Kim and John Hathaway looked impressive in their fight tonight, but Kim showed an expanded arsenal that should cause those in the Top 10 to think twice before getting within striking distance of him.

John Hathaway has not fought in the octagon since 2012 but it looked like he did not miss a beat. He landed three consecutive knees to the body of Kim in the first round and it seemed like they chopped the gas tank of ‘Stun Gun’ in half. In round two, Kim’s hands were by his side and his mouth was wide open. If the fight had gone to a decision, his corner should have been concerned. The fight ended in round three, however, and Kim’s knockout will live in the highlight reels for years to come.

Kim was controlling where the fight was going and backed Hathaway up against the cage. Hathaway did not like this positioning so he lunged at Kim with a right elbow and tried to follow through by running past him. What Hathaway did not know was that Kim had countered Hathaway’s shot with a spinning elbow of his own. The elbow smashed the right eye of Hathaway and he fell down like a house of cards. Kim knew the fight was over and simply waited for the referee to come running over to wave it off.