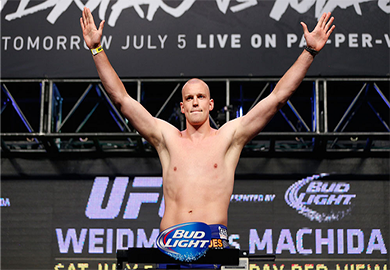 Stefan Struve’s manager spoke with Ariel Helwani on The MMA Hour to talk about the incident that occurred backstage that forced him off of the UFC 175 card and halted The Skyscraper’s return.

For those who don’t know, Struve was slated to return against Matt Mitrione at UFC 175, but just a few minutes before the bout almost fainted and as a result the fight was scrapped.

“I’ve subsequently spoken with Dana [White] several times and his question has been ‘Does Stefan want to fight?'” McMahon said. “I’ve spent a fair amount of time with Stefan since the canceled bout, and his response was 100 percent, he definitely wants to fight.'”

“He had essentially what boiled down to a panic attack,” McMahon said. “It manifested itself physically, he had a fainting episode backstage before his fight occurred. I don’t think he took full account of the emotions to step into the Octagon. I think he had some lingering questions about where health was even though he’d been cleared by specialist. All those things came together in a perfect storm and unfortunately it created a tremendous amount of anxiety, and it caused him to faint. … Stefan has already seen several doctors, the doctors have reiterated there is nothing physically wrong with him, it was more the psychological response which created the physical manifestation of him fainting.”

“We’ll work with the UFC maybe to map out an approach which doesn’t put so much pressure on him for his first bout back he was on one of biggest cards of year for a featured bout,” McMahon said. “I think people take for granted how incredibly, how much pressure is associated with that, from the media responsibilities, to realizing you’re being seen by millions of people, it was a lot for that young man.”

“My guess is you’ll see him sooner than later,” McMahon said. “Dana’s been super supportive of that and he’s kind of left it up to us to figure out what the timeline to be. We’ll have something Stefan pretty soon.”

What do you think PENNation? Is it smart for Struve to return after numerous health scares? Sound off in the comments section.

This article appeared first on BJPENN.COM
Previous articleBigfoot Disses Arlovski, Says He Will Knock Him Out
Next articleA Look Back at B.J. Penn’s Amazing Mixed Martial Arts Career
© Newspaper WordPress Theme by TagDiv