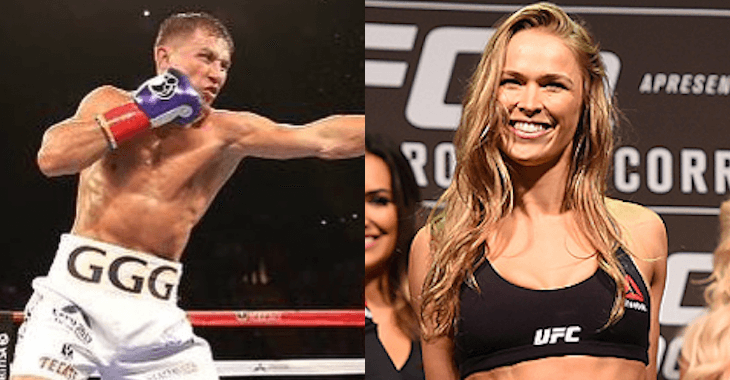 The world of mixed martial arts and boxing clash once again as Ronda Rousey shows some love for Gennady Golovkin days away from his major HBO pay-per-view debut! Golovkin is the top ranked middleweight and will be walking into Madison Square Garden on October 17, 2015 with a ton of momentum behind him as he is on a ridiculous thirty-three fight win streak.

His opponent in the main-event bout will be David Lemieux who sports just two losses throughout thirty-six professional fights. Casual fans who have been trying to get into the sport of boxing dipped their feet with Floyd Mayweather and Manny Pacquiao’s slow fight in May and were let down to say the least. Seeing as thirty of Golovkin’s wins have come by way of knockout, those same fans may want to give the sport another chance this Saturday!

Ronda Rousey is fully behind “GGG”. Check her out rocking his shirt below— he sends some love back her way too!

Thanks for your support @RondaRousey! pic.twitter.com/rrhCtCJoxK

Who do you have winning the big match this Saturday? Share your predictions in the comment section below!