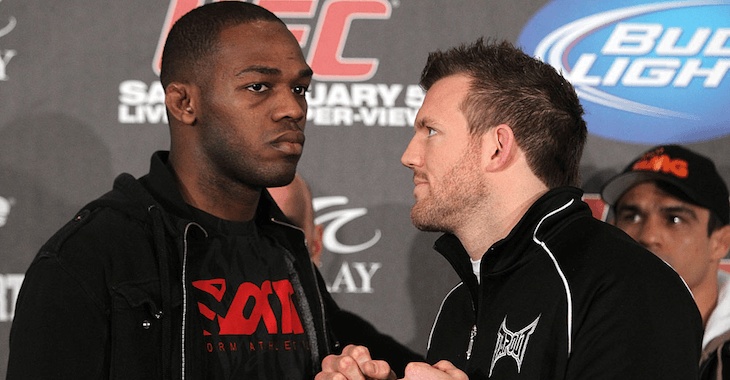 Ryan Bader has his sights set on Daniel Cormier’s UFC Light Heavyweight Championship. The “Ultimate Fighter” alum is currently ranked third in the division just under Anthony “Rumble” Johnson and Alexander Gustafsson, both of whom have fallen to Cormier’s wrestling skill in the past.

Bader believes that now is the time for him to capitalize on the momentum his five-fight win streak has given him by stepping into the octagon with Cormier, challenging him for his title. Seeing as Bader just defeated a former UFC Light Heavyweight Champion in Rashad Evans at UFC 192, a title shot would be logical for Bader.

The return of Jon Jones threatens his chances at gold, though. “Bones” was involved in an incident in April that forced the UFC to suspend him and strip him of his championship. Jones recently heard that he would not be serving jail time for his legal troubles, but rather eighteen months of probation. Bader believes that no matter when Jones is coming back to the octagon, he should wait for Bader to get his shot first.

“What I think they should do, is they should wait, probably…I don’t know, 10 months, and give Ryan Bader this title shot, and he can come back and fight me once I get that. That’s what I think should happen,” Bader told Submission Radio. “The whole thing with [Anthony Johnson], you know, some media ran with that. He just Tweeted something about ‘I never said anything about Bader or whatever, but I will take the fight.’ You know for me, I’m looking at fights that make sense right now. He had his shot, let me get my shot. Gustafsson just had his shot. Who’s in front of me? Gustafsson and Anthony Johnson.”

“I have a five-fight winning streak right now, the longest one in the UFC in their light heavyweight [division] by far, Bader continued. “So for me, these guys all got to get there shot, and you’re going to keep on recycling them? So I think I deserve it enough to go out there and fight Cormier. Why would I just take the fights just to take a fight? As of right now, my mindset is, I’m fighting Daniel Cormier until we hear what happens with Jones. So I don’t know. That’s my mindset right now.”

Who do you think deserves a shot at UFC gold the most? Share your thoughts in the comment section below!