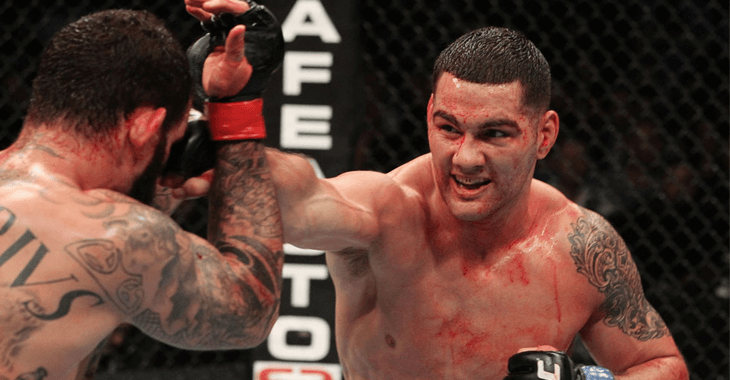 Bisping was recently a guest on Submission Radio and gave his thoughts on the fight between champion Chris Weidman and Luke Rockhold (Transcribed by Bloody Elbow):

“I think for that one I’ve gotta go with Rockhold, to be honest. I mean, Weidman’s a great champion, he’s a fantastic fighter, he’s very, very tough. All that good stuff. He’s a great wrestler, great grappler, and he’s actually a good puncher. I just don’t think technically he’s that good on the feet. What gets him through is his strength, his size, his wrestling ability, and his chin. He’s got a fantastic chin. But I just think against Luke Rockhold, Rockhold’s a guy that trains daily with Cain Velasquez and Daniel Cormier so I think he’s gonna be prepared for the wrestling side of things. On the feet, Luke has the height, he has the reach, he has the range, he has speed, he has the diversity in the striking. So all those things together. And certainly on the floor as well, Luke’s very good on the floor. So he can match him on the floor as well. So I think when you put it like that, and Luke’s confidence and arrogance if you will, it’s a tough fight for Weidman. But again, I always pick Weidman to lose and he’s proved me wrong every time. So you’ve got to admire that. He’s more than capable of proving me wrong this time, but if I had to put money on somebody, I think my money would go on Rockhold.”

Who are you picking in the UFC 194 co-main event?