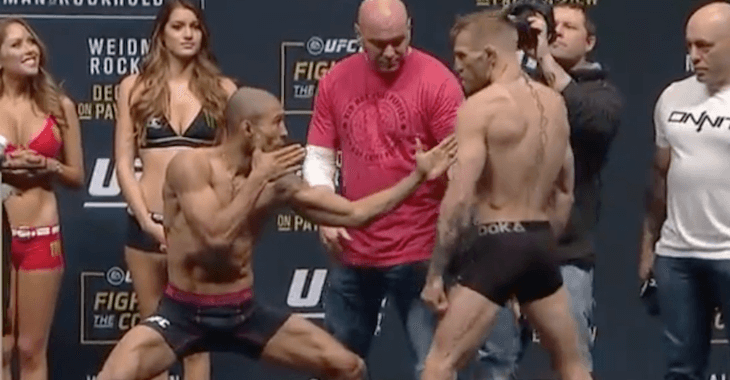 It was the most anticipated fight in featherweight history. Fans clamored for months and months at the possibilities of what could happen in the bout between Jose Aldo and Conor McGregor.

Over the weekend, the ultimate showdown that Brazilian and Irish fans traveled across the world for took just 13 seconds to come to a conclusion, and although an exciting and record-breaking win for Conor McGregor, many fans just really wanted to see more, including former light heavyweight champion Jon Jones.

Jones tweeted that he feels Aldo should get an immediate rematch, especially if Ronda Rousey will be getting one with champion Holly Holm, as many thought Rousey was outclassed in their fight that ended with Rousey being knocked out by a headkick from Holm.

Felt like Chris was outmatched, expecting to see MacGregor vs Aldo 2 https://t.co/hOZZcBS1YS

If Rousey is granted an immediate rematch I would expect the same treatment for Aldo. It only seems right https://t.co/taoqVItasU

A fan asked Jones “do you think McGregor defends the belt?” It looks like Jon Jones has “The Notorious” in the rematch.

Another fan agrees with Jones saying “Aldo definitely deserves a rematch. He was undefeated for 10 years.” However, although Jones says the rematch should happen himself, he knows it all comes down to who is going to sell the biggest fight.

At this point yes still want a longer version of the fight.. It would simply be epic https://t.co/KuV68W0oal

Yes but he is not the most marketable, let's see how this plays out https://t.co/Z7cv6plBQY

What do you think McGregor and Aldo fans?

Do you want to see the two go at it for more than 13 seconds? Share your opinion on a McGregor versus Aldo rematch in the comments!