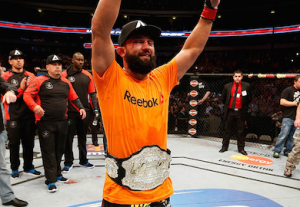 If you missed UFC 171 this past Saturday than boy did you miss a good one. Yes, the year so far as been a very decision heavy one for UFC events, but UFC 171 delivered in more ways than one. Most of the fights were extremely entertaining, even the ones that did go the distance were close, back and forth battles. Then there was the main event, which turned out to be a war between two of the best at 170 lbs.