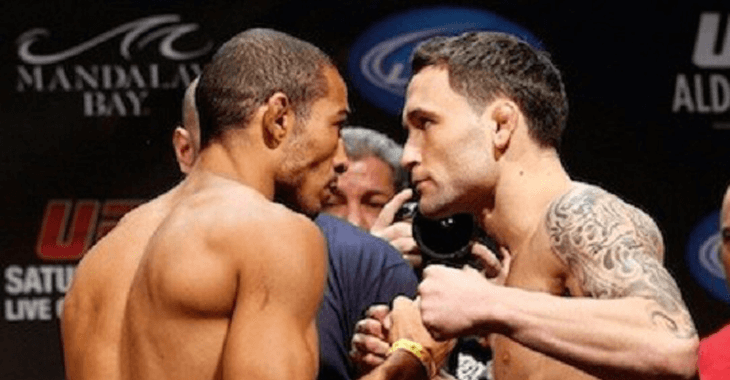 Even though former UFC lightweight champion Frankie Edgar has his own fight against Chad Mendes that isn’t getting as much media hype this week, he still hasn’t pushed away the reporters when asked about the featherweight championship fight between Jose Aldo and Frankie Edgar.

Edgar spoke with MMA Noise on his thoughts on Aldo being the underdog going into the featherweight title fight this Saturday (Transcribed by MMA Mania):

“I’m going to go with Aldo, he’s been on top for so long. I’m surprised that he’s the underdog, I think that’s kind of ridiculous, the guy hasn’t lost in a really long time. Anything can happen, McGregor has definitely been holding his own in there and doing it in pretty good fashion. But, I think Aldo is going to take it. Yeah, you just can’t talk about it if you don’t back it up because you will be forgotten about and people won’t want to hear what you’re saying. He’s been backing it up. I think he’s had some good matchups for himself and some favorable situations where Chad’s coming in on short notice, but, this is going to be the biggest test for him.”

Who are you betting on in the Aldo versus McGregor matchup? Click here to vote on the BJPENN.COM poll and to see the results!