Details have emerged on the incident that got UFC women’s bantamweight fighter Juliana Pena arrested on Sunday morning.

The winner of season 18 of The Ultimate Fighter was arrested and charged with two counts of assault by the Spokane Police Department in Washington after a fight occurred outside of a bar. Details reported by Deadspin have revealed that Pena allegedly attacked a worker at the bar as well as the building owner below the belt after being denied access to the closed bathroom to clean up fellow fighter Joshua Gow’s bloody face.

From Deadspin:
The names of the witnesses are redacted, so it’s hard to tell exactly how many people police talked to or what positions they held at the bar. Though a few details change, the basic outline stays the same: Pena was told she can’t use the bathroom, got angry, and kicked two men in the groin a total of three times.
This is the most detailed account of what happened: 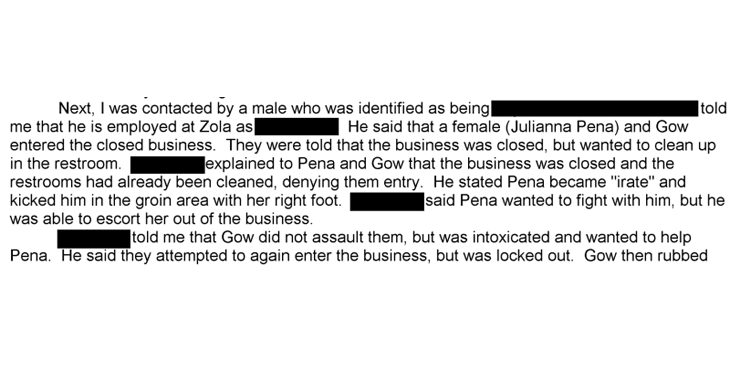 The UFC is aware of the situation and is currently doing more investigations of their own on the incident.