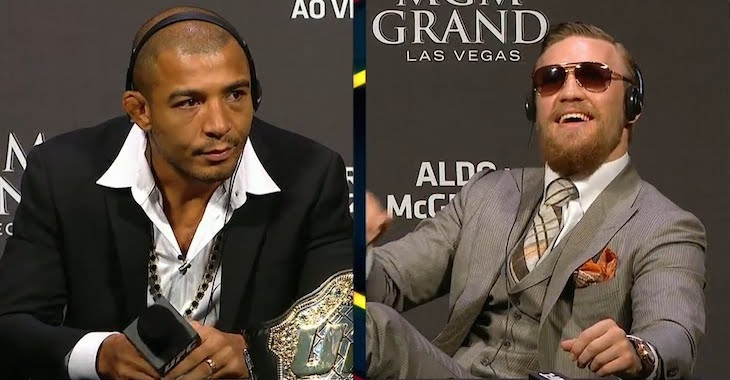 UFC featherweight champion Jose Aldo is sick of talking about Conor McGregor and vows to never mention him again after they fight at UFC 194.

The two men were scheduled to face off at UFC 189, before the champ had to pull out with a rib injury, which forced McGregor to step in and take on Chad Mendes on two weeks notice. After a high pace fight and getting taken down several times, McGregor managed to stop Mendes with strikes in the second round.

Aldo recently took a visit to his social project to celebrate Children’s Day and while he was there talked to the media:

“Recovery was good, and now it’s time to focus on the future. It’s in the past, we have to look to the future and forget about the injury and anything else. I’m 100 percent already, playing soccer and able to train. Let’s hope nothing bad happens so we can get there and put an end to this story.”

“Yeah, (I’m tired), but I’m used to that already. I can deal with that now. It was supposed to be gone already, but after Dec. 12 we will win and we won’t talk about him anymore.”

Who do you think will win at UFC 194, the champ or the interim champ?

There’s obviously a heated rivalry between the division’s two top dogs, and an eery sense of nationalism to boot. Aldo, carrying the weight of Brazil on his shoulders, and McGregor trying to defend Ireland’s pride.

Whoever wins the bout will no doubt raise their stock as one of the most dominant fighters in the landscape today. Aldo, having not lost since his lone career defeat back in 2005, and McGregor, who’s recent success speaks for itself. Additionally, Conor was able to do what Aldo was not in stopping Chad Mendes, controversy free.