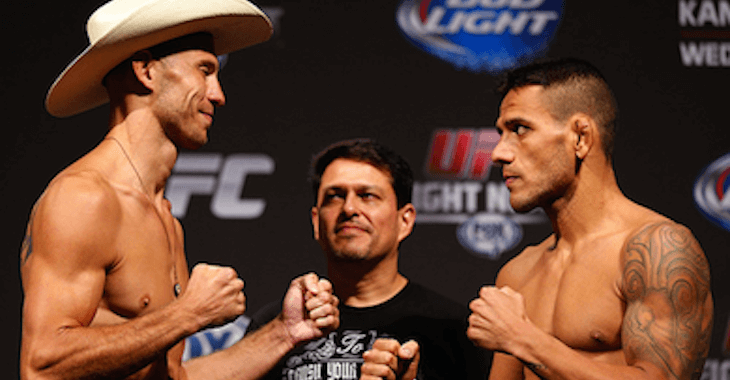 The UFC lightweight title will be on the line on Dec. 19 at Amway Center in Orlando, Fla., when champ Rafael dos Anjos looks to defend his belt for the first time against the dangerous Donald Cerrone at UFC on FOX 17.

This event is set up to be quite the night of fights. Even on the Fight Pass prelims there’s exciting fights set to go down.

On the main card we’ve got a crazy heavyweight scrap between former champ Junior Dos Santos and Alistair Overeem and a lightweight fight between Michael Johnson and Nate Diaz.

The televised prelims will feature the interesting featherweight scrap, Myles Jury vs. Charles Oliveira, which will be Jury’s division debut. If we jump all the way down to the Fight Pass prelims we’ve got an exciting fight set up between Team Alpha Males’ Danny Castillo and Nik Lentz.

And don’t forget this is a free televised event! It sort of feels like it’s way better than some PPV’s we’ve been getting, but hey, just saying.

Check out the full lineup below!

Which fight are you looking forward to the most? The title fight is sure to be fireworks, but man, that heavyweight scrap between Dos Santos and Overeem likely won’t make it out of the first round!