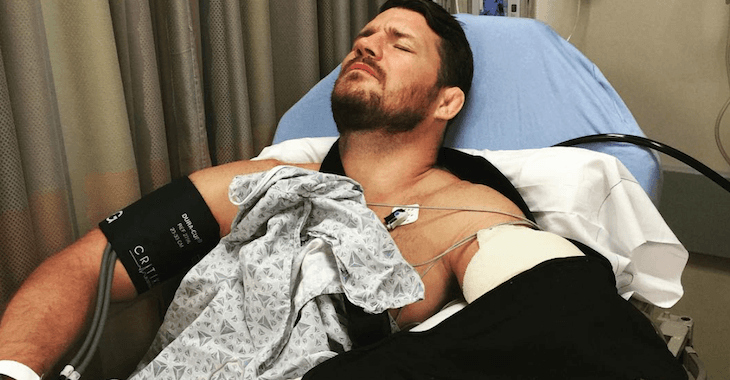 UFC veteran Michael Bisping had to pull out of his scheduled fight with Robert Whittaker on Nov. 14, 2015 at UFC 193.

Bisping suffered an elbow injury and had to undergo surgery. In his place the UFC have booked Uriah Hall to fill in and take on Whittaker. Bisping took to Instagram to let his fans know that he had a successful surgery and he’s now on the road to recovery.

Bisping is currently on a two fight win streak, with wins over Thales Leites and C.B. Dollaway. There is no real timeline for his return or who he’ll fight when he comes back. However, there has been rumors of a possible fight between himself and former middleweight champion Anderson Silva.

mikebisping: Literally out of surgery minutes ago. Ouch!around 6 loose bodies removed from my elbow. # painmeds #woozy

Bisping’s two fight win streak is the first back to back wins he’s had since 2011, when he held a four fight win streak before losing to Chael Sonnen. After that loss he alternated wins and losses in his next 6 fights.

So whoever he fights next it’ll be a massive fight for him. He’s not getting any younger and if he wants to make a real run at the title he’ll have to put a good streak together.

Silva is still finishing up his suspension for testing positive for banned substances at UFC 183, where he won a decision, beating Nick Diaz. Before that, Silva dropped two straight to current champ Chris Weidman.

Do you guys want to see Silva vs. Bisping? It’s a fight that could have happened for a long time, but never did. Right now does seem like a pretty good time to set it up. So, sound off in the comments!