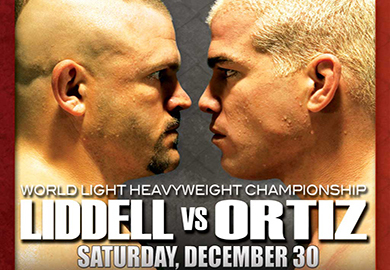 Fighters Who Are Fighting On UFC 166 Tonight
Gabriel Gonzaga (vs. Shawn Jordan)

This has always been touted as one of the Ultimate Fighting Championship’s most successful cards, and they have the statistics to back that up. This event possesses the fourth-highest pay-per-view buyrate in the company’s history with 1,050,000 PPV buys. (The highest goes to UFC 100 with 1,600,000 PPV buys.)

Chuck Liddell vs. Tito Ortiz
The fight was first announced at the UFC 63 weigh ins on September 22nd. The two had met in the octagon two years before in April 2004 where we saw Liddell knock Ortiz out in the second round. When the rematch was announced, the bookies labeled Liddell as a -260 favorite (bet $260 to win $100).

Ortiz didn’t let his underdog status phase him, though. In interviews leading up to the fights, he claimed he was a completely different fighter. In an interview with the Houston Chronicle Ortiz stated, “I think this fight will be 100 percent different than the first fight. When I first fought Liddell, I was still young, and I thought I had something to prove. I have my head on straight now.”

Regardless of who was labeled the favorite, the fact remained that this was hyped to be the most successful UFC event to date.

Tito Ortiz was advertised as the man who was looking for revenge from their first bout. He was looking to prove to Liddell that the first loss was a fluke and he was going to take Liddell’s respect if he wasn’t going to give it. Liddell was the champion who was as cold as ice. “The Iceman” was emotionless and actually enjoyed knocking people out-cold. White explained to us, “He’d fight Tito tonight for free, in his backyard with 10 people there, because he likes to fight. Not only that, he likes to finish people, he likes to knock them out.”

Fast forward to the main-event of UFC 66 and you could feel the electricity flowing throughout the MGM Grand Arena. From the opening second of the fight, fans were on their feet and ready for fists to fly. Tito Ortiz ate some brutal shots in the first round and was in danger of losing the fight after he was knocked to the ground by a Liddell left hook, but he miraculously recovered and made it to the end of the round sporting a cut over his left eye.

“The Huntington Beach Bad Boy” looked in bad shape at the start of the second round. The crown of his bleach blond hair was dyed red with his own blood and his mouth was wide open. He fought a much safer fight in the second round than he did in the first, keeping his distance and throwing less wild strikes. Ortiz was almost forced to abandon his attempted wrestling game after Liddell repeatedly stuffed him, but he finally landed a takedown with forty seconds left in the round. Though it led to nothing, it gave him the round and we walked into the third at one-a-piece.

Both fighters continued to fight a steady pace, methodically picking their shots. Ortiz tried to reclaim the success he had late in the second round with his takedowns, but was stuffed twice and ended up on his back once because of it. After making it back to his feet, he popped Liddell with a combination that seemed to just piss the champion off. Liddell charged toward him with a series of punches that put Ortiz on his back. Liddell smelled the blood and went in for the kill, diving on Ortiz’s huddled up body and throwing strikes until the referee peeled him off.

“The Iceman” Chuck Liddell defeated Tito Ortiz in round three, further solidifying his status as one of the baddest men on the planet.