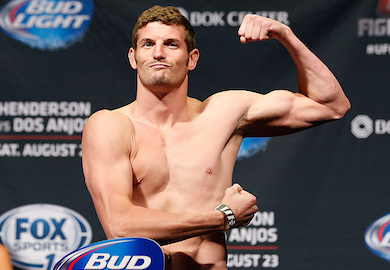 Chas Skelly took the back of Tom Niinimaki within a minute of the fight of starting. Niinimaki positioned well and eventually dumped Skelly off of his back, but it did take him a while to do so. Skelly was quick to once again take the back of Niinimaki but did not have his hooks in. The unfortunate positioning meant Niinimaki was easily able to scoot Skelly off and transition into an arm-in-guillotine.

Niinimaki did not have the guillotine locked in well and Skelly eventually slipped into full mount. At this point, Skelly used his speed to quickly move to the back of Niinimaki where he worked for another choke immediatly. He started to crank the rear naked choke with only one hook in and it looked like Niinimaki was going to survive. However, once Skelly locked in the other hook it was game over. Niinimaki was quick to tap once Skelly had both hooks in.

Chas Skelly def. Tom Niinimaki by way of Submission (RNC) 2:35 of Round 1