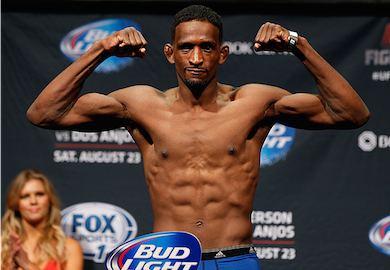 Neil Magny and Alex Garcia closed out the preliminary portion of the card on Fox Sports 2 with a welterweight bout. Magny spent the majority of the second and third rounds on his back, but it seemed he stayed busy enough to pull off the decision win.

Magny locked up the first round by spending so much time on top of Garcia looking for an arm lock. He was never able to get a threatening position, so he rode it out until the end of the round.

Garcia turned the tables on Magny and opened the second and third rounds with takedowns where he racked up some top-position time. Magny stayed busy off his back by picking his shots and constantly trying to get back to his feet. Garcia was sluggish while on top and was almost stood up twice.

When the decision was read, it was clear that the judges noticed the effort Magny was putting in off his back and gave him credit for it. Magny won the fight by way of unanimous decision and two judges gave him all three rounds. Do you believe they made the right call?