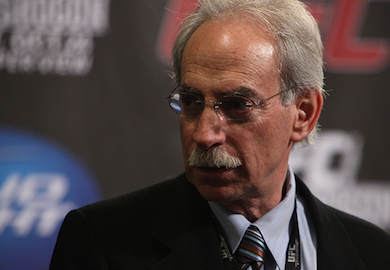 Vice President of Regulatory Affairs for the Ultimate Fighting Championship, Marc Ratner, is one of the world’s most respected combat sports regulators.

The former Executive Director for Nevada has seen it all. In a sport where the only rules used to be no biting or eye gauging, he, with the assistance of the UFC, has shaped the sport we all love into the modern era of MMA we are currently in.

The one major flaw in our sport is the judging. Too often do we see a fighter get his hand raised after three-rounds he lost. The 10-point must system, coupled with uneducated judges are always under fire, but Ratner believes the system works.

Here is what he told ‘The MMA Hour:’

“I think it does work. The problem with that system, whether it be boxing or MMA, is that not all 10-9 rounds are equal. Certainly in a three-round fight, that can skew who wins, but for the most part, most of the decisions are good.”

“Every once in a while, you’re going to get one that certainly goes against public opinion. But MMA is harder to judge than boxing, in my opinion, because you have to know what’s going on on the ground.”

“It’s an evolving discipline and I think we just have to keep on educating and that’s part of my goals. No, I don’t think it would be that easy to change. I’m not for the half-point system. I can understand it, but I think if the judges really concentrate and do their job, the ten-point must system can work.”