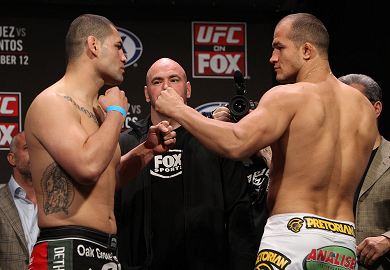 Kenny ‘Kenflo’ Florian has gone from a two-division title challenging fighter to a full-blown MMA analyst for FOX.

In the UFC Tonight hosts latest blog entry for FOX he breaks down Cain Velasquez for Dos Santos.

The key to the success of JDS will be his footwork. Dos Santos must stay mobile and circle to his right to avoid that Velasquez right hand that dropped him in Round 1 of the rematch. As he circles, he needs to keep his hands high and mix in feints to confuse Cain.

Cain combines his second and third attacks very well to help finish his takedowns moving from high crotch to double leg to body lock takedowns. Cain does this best when he has room to drive through his opponents in the center of the cage. It is very important that dos Santos counter those takedowns when Cain does get in on his legs.

Another important tactic that will help dos Santos is circling close to the cage… With the cage at dos Santos’ back, Cain will run out of room to finish his style of takedowns. Being the larger, stronger man, dos Santos also needs to use the Octagon to rest and pace himself.

Finally, it is important that JDS look to strike to the body…. If JDS throws jabs and crosses to the sternum or stomach of Velasquez, it makes changing levels and takedowns harder for the champion. Knowing that it is highly unlikely for Velasquez to tire on his own, body shots are a great way to take the energy away from even the most conditioned fighters. Staying at eye level with the shorter Velasquez will also help his chances. It will force Cain to change levels even lower and as we know in MMA, every millisecond counts for reaction time.”