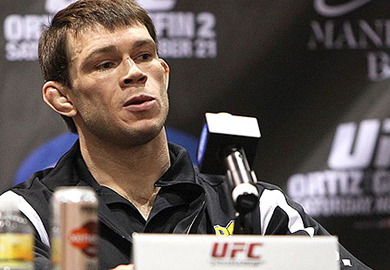 He’s not a short man my any stretch of the imagination.

Which is why it’s somewhat troubling to hear, that at just 34 years-old, he’s struggling so hard with a broken down body, that a simple athletic feat of dunking a basketball is now impossible for him to do.

“I watch guys like Henderson and ‘Shogun,’ and I just think about how lucky they are to still be able to do that. I felt so good at 32, and then by 33, I felt like, this is my forever body? Are you kidding me?”

“I’ve been able to dunk a basketball since I was 14,” Griffin said. “I couldn’t touch the rim when I tried yesterday.”

The Fowlkes story highlights the stress and unknown costs of multiple wars inside the MMA cage.

Griffin retired last year and hasn’t seen the inside of a cage since his 2012 victory over Tito Ortiz.