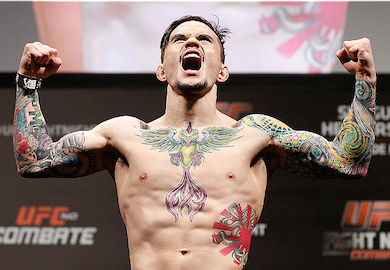 (No, it really isn’t like that. I’m just messing.)

Last weekend in Brazil, Scott Jorgensen (pictured) ran into (literally) one of the flyweight division’s top-ranked assassins in Jussier Formiga.

Jorgensen ended up losing the bout, when an inadvertent head-butt sent him packing down to the mat, where he later found himself submitting to a rear-naked-choke.

The Jorgensen camp contends that the illegal-head-butt was the cause for the defeat, and as a result should not count against the struggling former bantamweight title challenger.

Since dropping down in weight, Jorgensen, has yet to find any real success. He lost his debut in the division against Zach Makovsky and now he’s dealing with this.

With him being two-in and two-down in his bid as a UFC flyweight, the decision to appeal the controversial loss was probably an easy one for the Jorgensen team.

As of today, with the loss in place, Jorgensen is an astounding 1-5 in his last six-fights and the result of this appeal has the potential to effect his fighting future in the UFC. Fighters have been cut for less.