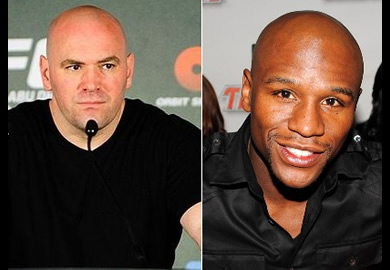 We have been featuring the back and forth banter between UFC president Dana White and the camp of professional boxing superstar Floyd Mayweather for the past several days.

Given Dana White’s background in boxing and Jiu Jitsu we wanted to put a fun spin on this ongoing feud and ask you fans who you think takes the win in a fight between the two public figures.

We know that Dana is a man who never backs down from anyone or anything. At one point a few years ago Dana even accepted a fight with his longest reigning 205 pound champion, Tito Ortiz, when the two’s rivalry was at its peak.

It is conceivable that based on his size advantage and grappling experience that Dana White has a legitimate chance in a “No Holds Barred” type of match against Mayweather.

But what do you think? Cast your vote now!