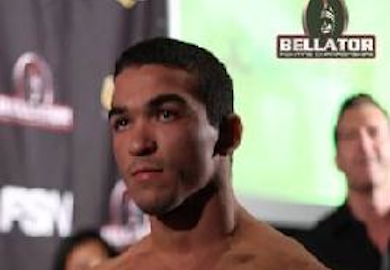 Patricio Pitbull Freire put on a spectacular performance at Bellator 123 to win the featherweight championship from Pat Curran, however the fight almost didn’t happen. Freire pulled out of the bout several weeks before the event, but then relented and agreed to fight Curran several days after.

He spoke with MMAFighting.com about the fight that almost didn’t happen:

“I was in New York for a Bellator photo shoot and they asked me to throw some flying knees, but I was landing on the concrete. I did it 30 times, and ended up injuring my meniscus…I couldn’t train. I went to the doctor and he said I couldn’t fight. Bellator took me to another doctor and he said the same thing, so I canceled the fight. I forgot about my diet, forgot about the fight.”

“I was asked a few times about the injury, and I said it wasn’t true. I actually canceled the fight a couple weeks before the event, I said I couldn’t do it. I had the worst camp of my life. I was so injured I couldn’t throw a kick, and then I injured my shoulder and I couldn’t throw a punch, too. I usually train twice a day, and I was barely training once a day. I had fever every time I stopped training. It was terrible.”

“Three days after I pulled out of the fight, Bellator called me again asking me if I was good to fight. I said I was still recovering, so they gave me a week to think. They called me again on Aug. 29, a week before the fight. My manager Jorge Guimaraes told me ‘man, let’s do this, you are ready. Every fighter has injuries. Get some rest, make weight, and let’s do this.’ I sparred, did five rounds, so I decided to take the fight.”

“Curran knew I was injured because they tried to get him another opponent, so he knew I was dealing with some issues. But that fight was tough, man. Curran gave me the toughest wars of my life. And I believe the fight would be even tougher if I was 100 percent.

“I knew it would be a war, and I would have to do my best in there to win the title. I didn’t want to leave it to the judges, but Curran is so tough. I knew I was winning, but I kept pushing forward and attacking him, and it paid off.”

“I can’t describe my emotions when I got that title. It was a dream coming true. My whole life I dreamed about being a world champion, and I still can’t believe I’m a world champion.”