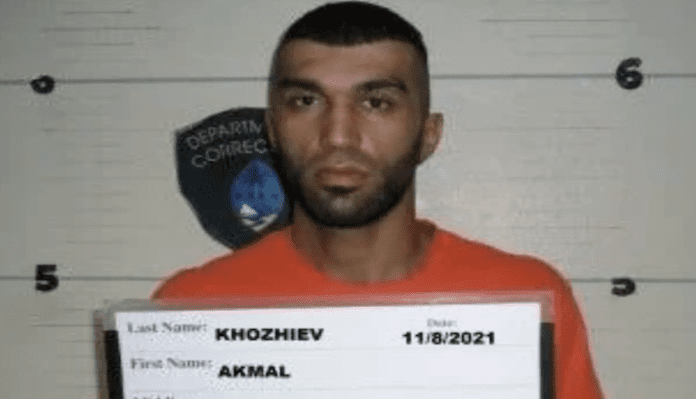 MMA fighter Akmal Khozhiev was charged with the aggravated murder of a doctor in Guam after allegedly stabbing him following an argument.

According to the Pacific Daily News, “Khozhiev, 27, was charged with aggravated murder and aggravated assault in connection with the death of Guam Memorial Hospital radiologist Dr. Miran Ribati, 44, according to a magistrate’s complaint filed by the Office of the Attorney General.” According to the report, the murder was a result of an argument between the two parties over vaccinations. Khoziev reportedly admitted his guilt already to the police, telling them that “I killed him” while he was covered in blood when police found him. Ribati was declared deceased at the scene of the crime.

According to witnesses, Khoziev and Ribati were eating lunch together at an apartment when they got into an argument about vaccinations. According to the witness report, Khoziev told Ribati “I don’t trust you anymore” and then put the doctor into a chokehold. The witnesses say that the fighter then fetched an animal bone from the kitchen and then stabbed the doctor in the neck. When the doctor tried to leave the home, he was stopped by Khoziev, who continued to stab him until he was dead. The witnesses, who were two women, were also reportedly hit in the head during the deadly struggle that occurred.

MMA veteran JJ Ambrose owns the Steel Athletics gym where both Khoziev and Ribati trained MMA together. According to Ambrose, the two were close friends, but after Khoziev attacked a gym member several months ago, he was kicked out of the gym. Ambrose also offered a comment on Ribati, remembering him as a very good person at his gym.

“He was such a nice guy to have around, he was always giving words of encouragement, telling us how much he loves the gym, he loved being here, loved training with us,”  Ambrose said of Ribati following his alleged murder by Khoziev.