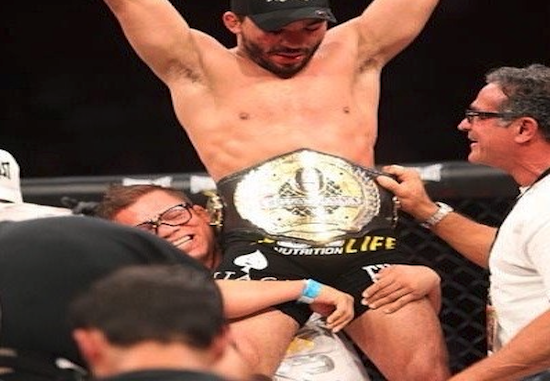 Leading up to the bout, Freire believes that a win over Straus would cement his place as the best featherweight in the world, and hopes media outlets take note of his win and start valuing Bellator fighters.

He spoke to MMAJunkie through an interpreter.

“First of all, let it be clear that I’m second for now; I’ll be the No 1. I consider myself undefeated, and we’re talking about an 11-year career. I have two split-decision losses that should have gone my way, but I think I lost for political reasons. What puts me at No. 2 are my numbers, my conquests, my performances. My accomplishments in the weight class are enormous. Almost no one has done as much as me.

“In 2013, I fought five times – four in less than three months. The first one was a loss to a top fighter, Pat Curran, for the belt, after 20 months away. I should have gotten the decision. After that, I had four wins – three knockouts and a complete domination of the other opponent. This year, I dominated Curran, who was again the champion and is a great featherweight that should be among the top-ranked fighters. I’m 10-2 in Bellator and should be 12-0. My overall record is 22-2 and should be 24-0.”

“I think the media overvalues the UFC and doesn’t give much credit to other fighters. Compare the records of the fighters from other organizations and you’ll see you are ranking guys wrong. Tell me how Pat Curran is behind Ricardo Lamas. What’s the logic in it? How is Conor McGregor ahead of Daniel Straus? If Straus was a UFC fighter, the UFC wouldn’t want McGregor anywhere near him. McGregor is good, and he may even have a bright future. But let’s be real here. If he didn’t talk so much, would he be so up in the rankings?

“Show the sport of MMA some respect. Everyone said the WEC guys would take beatings in the UFC; now they are the top fighters. Why do you think it can’t happen with us? Same thing happened with Strikeforce. And people said PRIDE guys were the best, but the UFC guys had success. It’s about the fighter, not where they fight, and high-level competition is everywhere – in some places more than others, but there are elites everywhere. There’s WSOF, ONE FC, etc. If you doubt some of the guys I beat in Bellator, check the other top-10’s opponents. If it was so absolute, the rankings would never change. New signings would never win in the UFC and so on.”