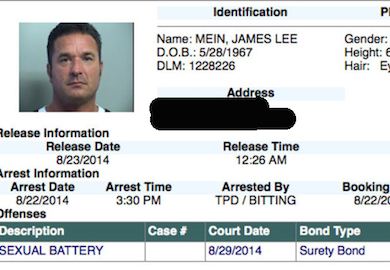 In tonight’s UFC on FOX Sports 1 co-main event, Jordan Mein will have to shake off more than just the usual pre-fight jitters.

Yesterday in Tulsa, his longtime cornerman, trainer, and father was arrested on Felony sexual assault charges, resulting in not only his jailing, but his ban from tonight’s UFC event.

UFC officials released the following statement to the press: (Via MMAjunkie.com)

We were made aware that James Lee Mein, father of UFC competitor Jordan Mein, was arrested yesterday on allegations of felony sexual assault. Mr. Mein is accused of sexually assaulting a housekeeper at the UFC’s host hotel in Tulsa, Okla.

The UFC finds the allegations against Mr. Mein deplorable and we fully support local law enforcement in its investigation. The UFC is also prohibiting Mr. Mein from attending tonight’s event should he post bail.